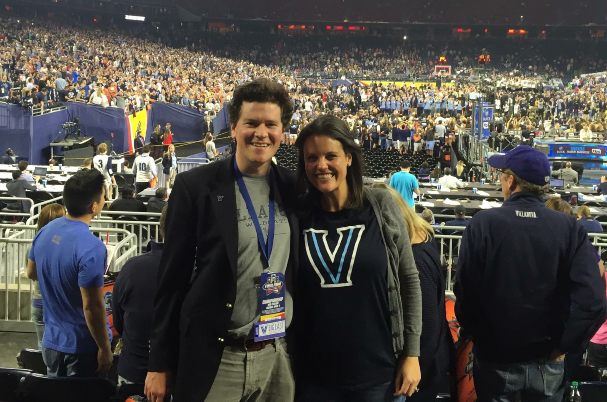 VILLANOVA, Pa.  – The Villanova University Alumni Association (VUAA) has selected Kevin Curley II ’09, as the recipient of its Young Alumni Medal. Villanova University President the Rev. Peter M. Donohue, OSA, PhD, presented the award to him at an alumni association event Nov. 8 in Dallas. A 2009 graduate of the Villanova School of Business (VSB), Curley is a Certified Financial Planner at Global Wealth Advisors, a community leader in the Dallas area and an active volunteer leader in Villanova’s comprehensive capital campaign, “For the Greater Great: The Villanova Campaign to Ignite Change.”

The Young Alumni Medal is presented by the VUAA to an alumnus or alumna who has reached a significant level of achievement in his/her profession and who is a model of the quality and caliber of today’s Villanova student. The award honors alumni who have made outstanding contributions to society, including professional or academic achievements and service to the college.

Curley is among a select group of financial advisors who has earned the Certified Financial Planner designation. At Global Wealth Advisors, he counsels families on investments, estate and financial planning. Curley previously worked at UBS, where he was invited to participate in the New Financial Advisors Forum for top producing new hires in 2013.

Since graduating from Villanova University in 2009, Curley has remained an active member of the University community. He serves on the campaign executive committee for the Villanova Campaign to Ignite Change and co-chairs a committee seeking to increase participation among young alumni.

Curley is a leader in the Dallas community, lending his time and expertise to numerous local organizations. He spearheaded a fundraising effort to benefit Vogel Alcove, an organization whose mission is to help young children overcome the lasting and traumatic effects of homelessness. Vogel Alcove serves as many as 200 children each day, allowing them to learn, grow and thrive in a place free from hunger or trauma. Through the efforts of Curley and a team of fundraisers, they built two much-needed storage facilities for play equipment and painted murals to help inspire the children. Furthermore, through in-kind donations, Vogel Alcove was able to add a new shade structure over the blacktop to protect children from the Texas heat.

In 2015, Curley was selected to the Leadership Dallas program run by the Dallas Regional Chamber (DRC). Leadership Dallas is the DRC’s flagship leadership development program, aimed at providing the city with an ongoing source of diverse leaders who are prepared and committed to serve as catalysts and sustainers of positive change for the quality of life in the greater Dallas area. Curley also serves on the board of the Dallas Center for Architecture and, in 2016, co-chaired their annual fundraiser, Rockitecture, which netted more than $90,000 to benefit the center and a scholarship for diversity in architecture. Additionally, Curley serves on the board of Uptown Dallas Inc., an organization focused on the management of the public improvement district for the economic engine of the city.

Kevin and his wife Courtney ’09 are the parents of sons Declan and Conrad.

Since 1842, Villanova University’s Augustinian Catholic intellectual tradition has been the cornerstone of an academic community in which students learn to think critically, act compassionately and succeed while serving others. Ranked among the nation’s top universities, Villanova supports its students’ intellectual growth and prepares them to become ethical leaders who create positive change everywhere life takes them. For more, visit www.villanova.edu.